Post-doctoral position open: the innovation of branching in plants

Very excited to invite applications from post-doctoral researchers to join my lab to work on a Leverhulme Trust- funded project to look at the mechanisms regulating branching in Selaginella kraussiana. I would like to use a candidate gene approach looking at Selaginella PIN and TCP function. I have written a bit about the project here, and you can apply here.
Posted by Jill Harrison at 08:53 1 comment:

Grant awarded from The Leverhulme Trust: the innovation of branching in plants

The earliest land floras looked something like the tiny fungi, freshwater algae and lichen crusts that we can see today growing on a roof, tree trunk or wall. Plants originated from algae growing in such crusts around 470 million years ago, and the first land plants resembled modern mosses, each having a tiny simple stem with a swollen reproductive tip. In contrast, the vast majority of today’s land plants are large with elaborate branching shoots that make leaves and flowers from proliferative shoot tips. I am interested in how the switch from simple to elaborate plant forms occurred during evolution and would like to answer questions such as how did branching first arise, how did plants learn to make proliferative shoot tips and how did they later learn to make leaves? These steps were all pivotal in enabling plant life as we know it to conquer the land, and as animals depend on plants for oxygen and food, they ultimately underpinned the radiation of life on Earth. 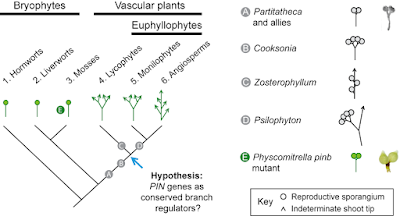 Over the last decade, newly discovered fossils, genetic techniques and model systems have unlocked the door to answering my fundamental questions about plant evolution. I aim to build on these advances to identify the genes that were responsible for the origin of branching. Most of our knowledge about branching comes from flowering plants, which have a recent evolutionary origin. With my Leverhulme Trust Project Grant I will use a relative of coal swamp plants whose branching form has changed little during the past 300 million years to study the genes involved in branching. This spike moss is called Selaginella kraussiana, and it shows an ancient pattern of branching in which the proliferative shoot tips split in two as the plant grows to give the plant a forking overall structure, rather than the bushy structure of flowering plants. The project will identify any similarities and differences in branching mechanisms between spike mosses and flowering plants and will thereby reveal the route by which branching forms evolved.
Posted by Jill Harrison at 08:43 No comments:

Testing Zimmermann’s Telome Theory.
(Published with photos on The Node here)
Jill Harrison
A perspective on our recent paper ‘CLAVATA was a genetic novelty for the morphological innovation of 3D growth in land plants’1.
In the 1950’s, the German botanist Walter Zimmermann (photo here) hypothesized a series of developmental transitions enabling plant forms to radiate during evolution2. Zimmermann’s so-called Telome Theory has received much attention from those interested in leaf evolution as it incorporates suggested steps by which early leafless plants such as Cooksonia were modified by processes of overtopping, webbing and planation to form shoots with leaves2. Less attention has been given to his ideas about earlier steps in plant evolution, namely how cell division planes translate directly into plant form in aquatic algal relatives of land plants, and how a capacity to rotate stem cell divisions through multiple planes was a key innovation of land plants, enabling them to orient growth along multiple axes2.
In mosses, a developmental transition recapitulates Zimmermann’s evolutionary transition when a shoot with multiple growth axes (3D growth) initiates from a filamentous precursor tissue (2D growth) that resembles some algal relatives of land plants. During my post-doctoral work, I collaborated with Dr Adrienne Roeder and Professor Elliot Meyerowitz at Caltech to characterize this 2D to 3D growth transition by confocal live-imaging, and showed how cell division planes start to flip around to establish an apical stem cell with tetrahedral shape during shoot initiation3. We found that new shoots and filaments can initiate right next to each other from a parent cell and concluded that local cues and asymmetric divisions were important in shoot initiation2.
When my first PhD student (Dr Chris Whitewoods, né Mr Chris White) joined my lab in Cambridge to work on moss CLAVATA function, we did not know that CLAVATA would act locally to pattern asymmetric divisions in moss shoots, but this is what we found.
CLAVATA signaling involves the production and perception of small mobile peptides, and these two functions are spatially separated1,4. Mr Joe Cammarata joined my lab and subsequently moved to Cornell to work with Prof. Mike Scanlon and Assoc. Prof. Adrienne Roeder, and showed that disruption of either function results in problems with cell division plane orientation as shoots initiate. We also discovered that CLAVATA genes are only present in land plants, leading us to conclude that these genes contributed to a key, land plant specific innovation during evolution1.
Moving forwards, I would really like to build on our work to find out how CLAVATA specifies cell division plane orientation during moss shoot initiation, and whether CLAVATA contributed to the origin of indefinitely proliferative shoot growth in vascular plants. Answers to these questions will give fundamental new insights into plant developmental patterning and plants’ conquest of land respectively5,6.
Whilst Zimmermann’s Telome Theory ideas have been critiqued (e.g.7), phylogenetic and molecular genetic advances in a range of plant model systems mean that they are now open to experimental interrogation. I am excited about the possibility of further research to test his ideas and think that our investigation of moss CLAVATA function illustrates one way to do this.
Further reading:
1     Whitewoods et al. (2018). CLAVATA Was a Genetic Novelty for the Morphological Innovation of 3D Growth in Land Plants. Current Biology, here.
2     Zimmermann (1952). Main results of the ‘Telome Theory’. The Palaeobotanist 1, here.
3     Harrison,et al. (2009). Local cues and asymmetric cell divisions underpin body plan transitions in the moss Physcomitrella patens. Current Biology 19, here.
4     Bowman and Eshed (2000). Formation and maintenance of the shoot apical meristem. Trends Plant Sci 5, here.
5     Harrison (2017). Development and genetics in the evolution of land plant body plans. Phil. Trans. R. Soc. B 372, here.
6     Harrison and Morris (2018). The origin and early evolution of vascular plant shoots and leaves. Phil. Trans. R. Soc. B 373, here.
7     Beerling and Fleming (2007). Zimmermann’s telome theory of megaphyll leaf evolution: a molecular and cellular critique. Current Opinion in Plant Biology 10, here.

Posted by Jill Harrison at 04:12 No comments: